Interested in entering the drilling industry? We outline the career progression the exists in this sector and point out some of the main responsibilities associated with each position.

Scroll down to read more

The UK oil and gas industry has weathered a relentless storm in recent years so when OGUK released their 2019 Economic Report confirming an upturn in the sector, the industry breathed a big sigh of relief.

Overall performance is up, with £billions of assets changing hands and production is not only on the rise but also at its most efficient in years.  Notably, the drilling sector is performing particularly well with over 100 development wells being drilled for the first time since 2015.

Going hand in hand with this increase in activity is a rise in employment and an estimated 10,000 additional oil and gas jobs were created last year.

It seems there hasn’t been a better time in the last few years to enter the industry and the drilling sector is an area that offers excellent employment opportunities.  A career in drilling can be very rewarding both in terms of time off and remuneration. Many individuals entering the sector begin as unskilled labourers, climbing the ladder as they gain valuable experience.  We’ve mapped out this career progression below identifying the differences between a roughneck and a roustabout and letting you know who sits at the very top of the drilling ladder. 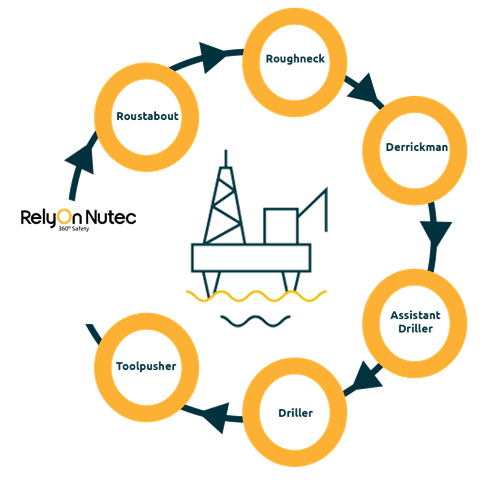 This is a basic unskilled labouring position and is the role in which many workers get their start offshore.  Roustabouts are expected to help out the drilling team, maintaining equipment, tidying the deck and offloading/moving supplies.

From an unskilled to a skilled labouring position, a Roughneck is the next step on the ladder.  Duties include general equipment maintenance and assisting in the drilling process, for example, adding lengths of drill pipe and/or extracting drill pipe.

Did you know that the mast on a drilling rig is called a derrick? And the Derrickman is so called because he sits on top of it? This is a skilled role which supports drilling operations and is recognised as one of the most demanding in terms of physicality.  You need a head for heights for this one.

You’ll know all about the Assistant Driller position because this guy will have been supervising you and the rest of the crew on the rig floor as you’ve risen up the ranks. The Assistant Driller aids and supports the Driller and is also required to perform safety checks and monitor drilling equipment.

The Driller has overall responsibility for drilling operations. This is a highly skilled job requiring extensive knowledge of drilling procedures, rock types etc.

Like the Driller, the Toolpusher has a skilled and senior role although this one has more of an administrative slant.  He is required to liaise with the Company Man and would be responsible for equipment, materials, resources and personnel.